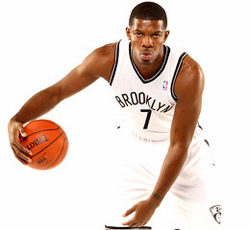 In 2006, the Letter Jacket Committee approached Joe Johnson about becoming the lead sponsor for the “Jammin for Jackets” Basketball Tournament. Joe graciously agreed to come on board. We are deeply honored and grateful to Joe for giving back to the hometown community.

Joe began his career at Little Rock Central. Over his career, Joe has achieved numerous awards including the following:

After graduation from Central, Joe attended the University of Arkansas for two years. Upon completion of Joe’s sophomore season, Joe was selected in the first round of the NBA draft by the historic Boston Celtics. Joe started 33 of Boston’s first 38 games as a rookie. Halfway through Joe’s rookie season, he was acquired by the Phoenix Suns where he developed into one of the most lethal three-point shooters in the NBA. In the summer of 2012 Joe was traded to the Brooklyn Nets.

Joe has found a new home with the Brooklyn Nets. Since joining the Nets, Joe is still one of the NBA’s premier players and a member of the NBA All Star team.

In addition to being and NBA All Star, Joe was a member of the USA World Championship Team during 2006. Joe played in all nine World Championship games which were held in Japan. The USA team finished the tournament with a 9-1 record and the Bronze Medal. We hope to see Joe on the USA Olympic team in the coming years.

The Letter Jacket Committee and Volunteers would like to thank Joe Johnson for helping sponsor the “Jammin for Jackets” Basketball Tournament. We wish Joe and the Brooklyn Nets the best of luck for the 2012-2013 season.